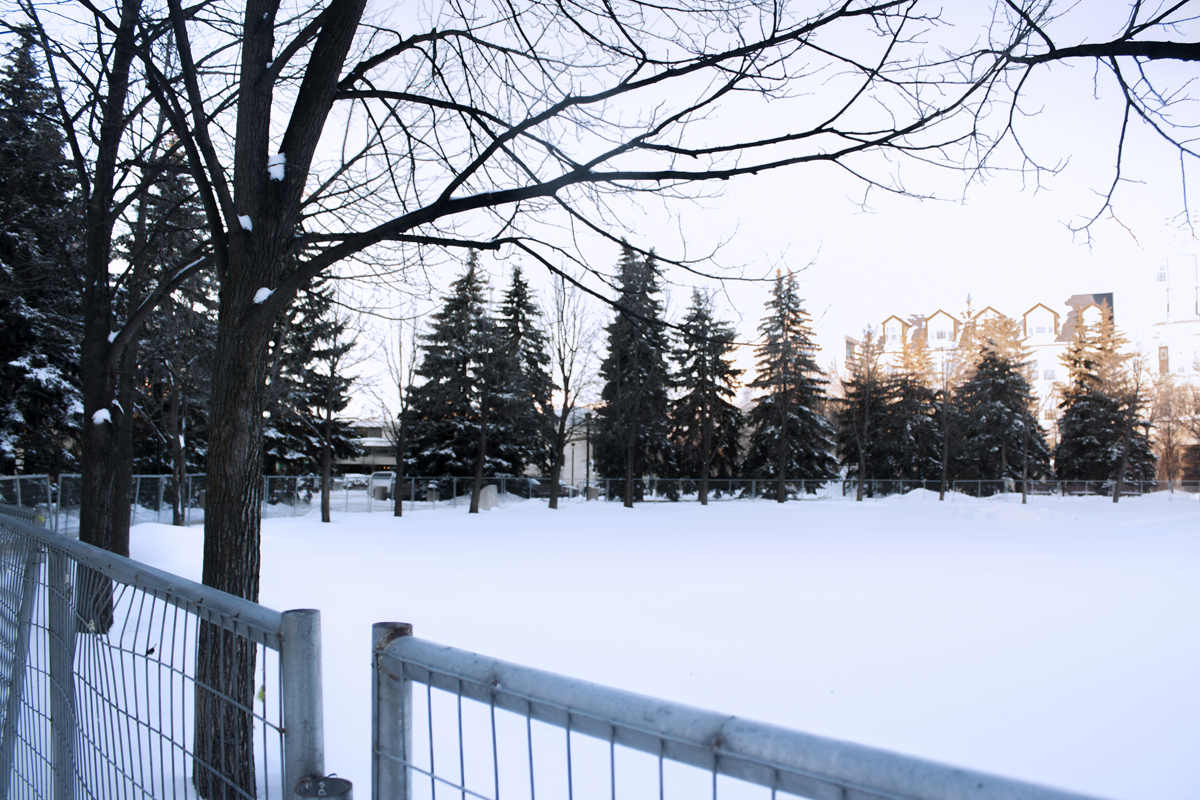 Photo of the Fort Garry campus quad, where Frost Fest is set to take place. Photo by Carolyne Kroeker

The University of Manitoba Students’ Union unveiled plans last week for their Frost Fest set to take place at the Fort Garry campus quad on Jan. 15. The lineup for the concert features local indie-pop band Royal Canoe as headliners.

Entry is free during the day. A beer garden will be open from 1 to 5 p.m. with volunteer support from different faculties and student groups. Free pizza will be available to attendees, and drinks will be available to purchase in the tent at the Frost Beverage Pavilion. A variety of activities will be happening in and around the tent, on the quad.

The space will be cleared out between 5 to 6 p.m. People will be readmitted for the concert, which is set to run until 11 p.m.

Tickets cost $10 and are available at Answers. Ticket sales opened to U of M students on Jan. 7 and require students to provide their student identification upon purchase.

As of Jan. 12, half of the tickets for the event have been sold.

In an interview with the Manitoban last March, Christian Pierce, UMSU vice-president external, said, “We want to introduce Frost Week. We’ll do Celebration Week, but we’ll call it Frost Week. We’ll keep the speakers, but it’ll be a little more Festival du Voyageur-like, and embrace the Winterpeg.”

“Frost Music Festival will be a first of its kind event at the University of Manitoba,” said UMSU vice-president internal, Jeremiah Kopp, in an interview last week.

“The idea will be for us to have a similar themed event at the University of Manitoba featuring and promoting local artists. So what we’re going to have is a big heated tent out on [the grass quad by the main transit stops] where it’ll be warm. People will be able to take off their jackets. They’ll be able to get food and drinks and watch great local musicians and performers play.”

The music
Royal Canoe’s latest album, Today We’re Believers, was nominated for a Juno Award for alternative album of the year.

Unlike with Frosh Fest, all of Frost Fest’s performers—Royal Canoe, Vikings, and Magik Trix—are based in Winnipeg.

Kopp said that working with local musicians and showing support for local music is a high priority.

“Frosh Fest was a huge success – making money and drawing 7,000 people to see a world famous artist. Now, UMSU wanted to showcase local artists in a unique way so that everyone can see how talented Winnipeg and our university are and celebrate made-in-Manitoba music,” Kopp said, adding that their goal was to be inclusive by offering different types and scales of concerts to students through the 2014-15 year.

Funding
Kopp told the Manitoban that the budget for Frost Fest came out of the money allocated for Celebration Week in the 2014-15 UMSU operating budget, which was approved by UMSU Council on April 21, 2014.

“Every year UMSU budgets for Orientation Week in January. So the money that’s going to be spent or incurred on the Frost Week and Frost Music Festival and Frost events is what’s budgeted in the approved financial [budget] for the union.

“[Frost Festival is] not like Frosh Fest was, such a large event that it had to be its own budget unto itself. It’s something we’re doing, us, in-house, much like every Celebration Week for the past number of years.”