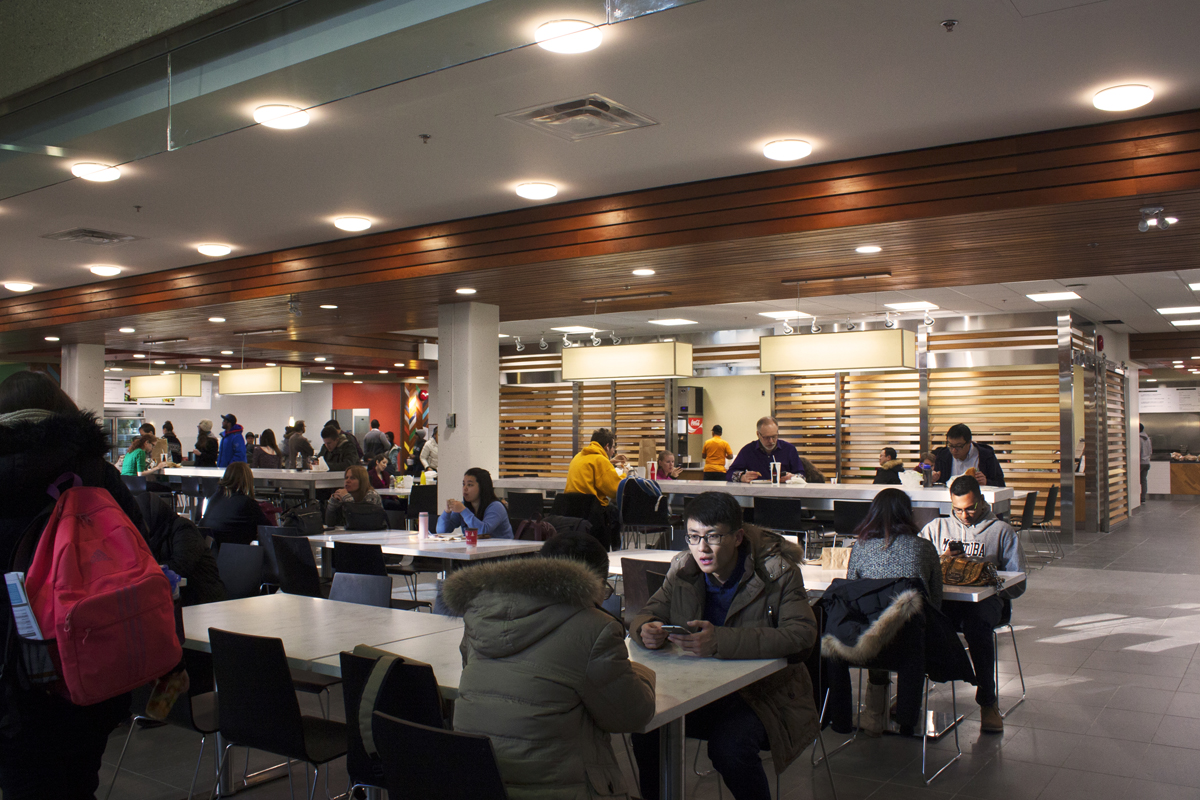 After undergoing extensive renovations for the first half of the academic year, Campo, the new campus food court in University Centre at the University of Manitoba, briefly reopened its doors to the public.

Construction of the central food court began on July 2, 2014 and included major changes to the food court’s layout, as well as new lighting, tables, and food stations.

Temporary walls that closed down the food court to the public, preventing students and faculty from accessing food stations and seating in a major section of University Centre, opened up in time for the public’s entry on Dec. 11, 2014 – the Campo’s reopening date.

Less than two weeks after opening last month, the Campo closed down again on Dec. 24 for the winter break, only to reopen for its first full semester on Jan 5.

The campus Campo
Most food facilities listed under the University of Manitoba Dining Services (UMDS) were closed at some point over the winter break. The establishments were closed on dates varying from Dec. 19-24, 2014 until Jan. 3-5, 2015.

The Fresh Food Company meal plan in Pembina Hall was available from Dec. 21-Jan. 2 for students who were on campus over the break.

With U of M offices opening and classes resuming on Jan. 6, food services are expected to return to regular hours for the winter term.

Last updated December 2014, the fall term hours of operation for the Campo and other food businesses were provided online by the UMDS, including the scheduled hours over winter break up until the first day of classes.

“Hours of operation will change weekly,” reads the UMDS’s website. “Please continually check [the website] for each week’s hours.”

Food oversight
The food court in University Centre has been in operation since June of 1970. The Campo, presently run by Aramark, provided space for small private businesses.

The 10-year contract between the University of Manitoba and Aramark, effective April 1, 2014, allows Aramark to retain its status as the food services provider at the university – a position it has already held for over 20 years.

“Many of the new programs, offerings, and initiatives we will see in the coming months and years are a direct result of the feedback received from the campus-wide food services survey, conducted last fall,” read a report by UM Today.

The U of M said in their announcement that, as part of their recent agreement, “Aramark will invest millions of dollars into new food concepts and capital improvements, and introduce new initiatives in sustainability practice, healthy eating and easily accessible nutritional content.”

The students’ demands
Some students remained skeptical prior to the reopening; others were relieved with the food court reopening.

Jenna Lang, first-year student in the faculty of science, said she was happy that construction had ended and is looking forward to diminished commotion, as well as more seating and food options.

On Oct. 4, 2012, past UMSU executive hosted an open forum on food services and meal plans at the Fort Garry campus. Students were given the opportunity to ask questions and voice their concerns about food quality and accessibility on campus.

Representatives from Aramark attended the 2012 forum to respond to questions and provide a presentation about some changes to their delivery of services on campus.

The Manitoban previously reported various concerns with Aramark’s policies and practices raised by students in regards to animal welfare in the production process of food items, and the inaccessibility to Halal food and more diverse food options on campus. Some raised general concerns about the near-monopolization of the university food services.

On Feb. 13, 2013, six unions representing students, faculty, and staff took to the steps of the U of M administration building to protest the increasing privatization of services, calling on the university to end the shift towards privatizing services, including custodial and food services, on campus.

At the 2013 protest, then-UMSU president Bilan Arte said, according to an article published by CBC, that students were unhappy about the cost and quality of food options.

Upon completion of the food services construction, Lang said that she was pleased about more culinary alternatives in University Centre.

“[UMSU’s] goal is to have sustainable, healthy, affordable, and diverse food options, ”Kopp told the Manitoban on Friday Jan. 2, 2015.

Kopp said that the renovations are a positive change, in line with UMSU’s priorities regarding food services. He said that with the changes in University Centre, UMSU members will have more food options.

Kopp confirmed that UMSU was briefed and consulted with information about the renovations at regular meetings with U of M Ancillary Services.

Kopp said he was not concerned about the reopening of the food court affecting UMSU-owned businesses.