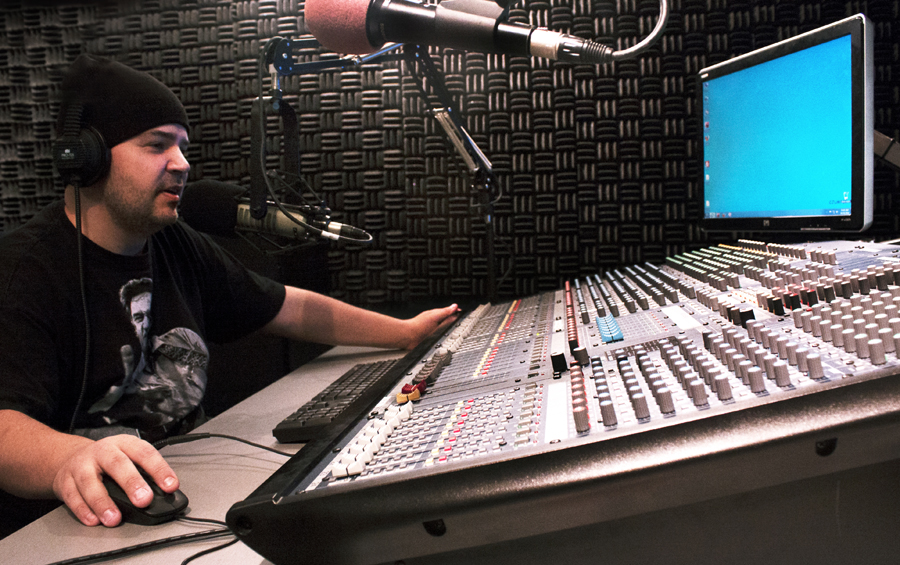 The campus: Tom Woodward, At Large

Student-at-large Tom Woodward is the host of one of the newer programs on UMFM 101.5.  Entitled At Large, Woodward hosts a musical variety show, airing Mondays from 2 to 3:30 p.m.

“My show, At Large, is about many types of music that have been recorded from the 60s to the present time. The songs I play during my show may have a lot of contrast, but they are connected though instrumentation, vocal style, genre, or feel,” explains Woodward.

Woodward is a student at the University of Manitoba and, when he is not on air, can be found studying psychology on campus. While At Large only premiered back in September, Tom has been volunteering for the radio station for a few years. He is currently the chair of the UMFM Board of Directors.

“By being a volunteer at UMFM, I feel more a part of the university and I have a better understanding of what is going on at the university. This comes through hearing university-related events on the radio and also by discussing university events and issues with volunteers at the station,” says Woodward.

This will be Woodward’s inaugural year hosting a show during Pledge-O-Rama and he hopes to bring the same level of enthusiasm demonstrated in previous years.

“I’m looking forward to a lot of excitement during Pledge-O-Rama: lots of volunteers at the station manning phones, listeners interacting by phoning in to make pledges, the chance to talk to listeners making pledges, and hearing how and why UMFM makes a difference to them.”

Hitting the airwaves on Sept. 13, 2012, The Hockey Show touts itself as “Canada’s only campus-produced radio show exclusively about the game of hockey.” Live every Thursday night from 5:30 to 6:30 p.m, the program evolved out of a hockey blog by one of its co-hosts, Trevor Alexander (aka Teebz).

“Michael [Elves, UMFM program director] asked me if I’d like the opportunity to take my rambling thoughts to the airwaves. After discussing it over, we agreed this would be a fun venture, and I rounded up a co-host in Brenden, aka “Beans,” and The Hockey Show hit the airwaves,” explains Alexander.

The Hockey Show is just as its name proclaims. “We cover all leagues, and we include stories from individuals all over the hockey world: ice crew members, to front-office executives, to players, to the fans on the street,” says Alexander.

While the program focuses exclusively on the best game you can name, off-air, Alexander stresses the importance of the community that surrounds the station.

“The people who work and volunteer at the station are some of the best people I’ve ever had the pleasure of meeting, and I’m happy to call them colleagues and friends,” says Alexander.

“The people have made my experience more than just ‘a radio show.’”

Going into their third year at Pledge-O-Rama, The Hockey Show plans on bringing excitement to the airwaves in the form of a Sega Genesis classic.

“If things go well, expect NHL ‘94 to be prominently featured in our promotion that week.”

David Dobbs, host of hllyh! wpg! started his show out of the classic Winnipeg fallacy: “I would often hear people talk about there being ‘nothing to do in Winnipeg,’ which is ridiculous, because if you look at any poster board there are dozens and dozens of things to do!” explains Dobbs.

“So I wanted to play local artists alongside nationally and worldly popular artists in hopes to help people realize the caliber of artistry in Winnipeg is just as high.”

Sharing the local music scene with listeners across Winnipeg every Tuesday at 8 p.m,, Dobbs’ expertise in the field extends past his role as a host. As guitarist and vocalist for post-garage band Vampires, Dobbs’ own music has had prominent success in the local Winnipeg scene. Having released their Every Kind of Light EPback in May of this year,Vampires saw their music topping the chart in the very station it was recorded in.

“UMFM has been very good to me and the music my band makes. We have recorded two of our releases there.”

“Because UMFM does their sought after ‘Live Session’ programming, as one of their sound engineers, I’ve been able to familiarize myself with the technical components of recording music and putting out records.”

As a host, Dobbs looks forward to the buzz that surrounds the Pledge-O-Rama week. “Every year there is more and more electricity in the air [at the station].”

The voice on the UMFM radio