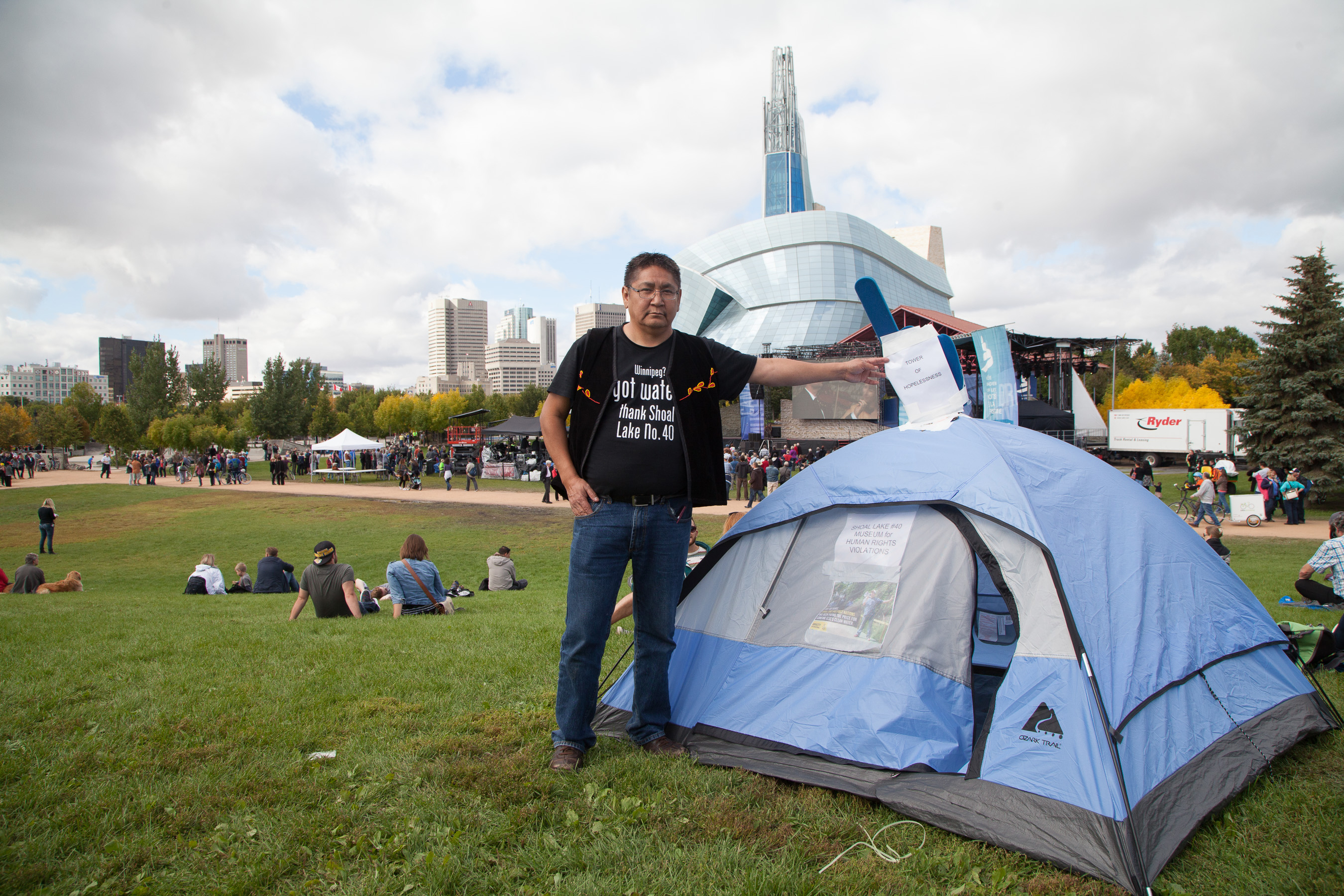 During the grand opening of the Canadian Museum for Human Rights (CMHR), the Shoal Lake No. 40 First Nations community launched their own living museum—the Museum of Canadian Human Rights Violations—to raise the public’s awareness of water issues and human rights violations faced daily in their community.

The First Nations community sought to educate Winnipeggers about its day-to-day struggles accessing water, as a result of their systematic community displacement, isolation, and exclusion from water in order to supply the City of Winnipeg with drinking water.

Representatives from Shoal Lake No. 40 told the Manitoban that they would be occupying the CMHR grounds for the duration of the opening weekend ceremonies and other events over the course of this past weekend.

In 1914, the federal government permitted Winnipeg to expropriate over 3,000 acres of the reserve’s land and divert water from Shoal Lake to the urban centre.

Shoal Lake No. 40 First Nation Chief Erwin Redsky described to the Manitoban how First Nations communities were physically displaced from traditional villages where drinking water was located and excluded from water infrastructure development.

In 1919, Winnipeg built an aqueduct along underground pipes to divert water from Shoal Lake, Ont. to supply to the city.

To this day, clean water is widely inaccessible in the Shoal Lake region. Shoal Lake No. 40 has been living under a boil water advisory for 17 years.

According to Redsky, residents struggle to access resources for survival on the artificial island—previously a peninsula, but re-constructed in order to build the aqueduct—surrounded by contaminated water.

The chief told the Manitoban that the community has opened up their own museum to exhibit their situation and educate people about the source of the City of Winnipeg’s water.

“The museum has opened up their museum, and we’re opening ours, too – the Museum of Canadian Human Rights Violations.”

Citizens of Shoal Lake No. 40 First Nation held a protest camp on the grounds outside the CMHR during the course of the museum’s grand opening ceremonies to draw attention to their direct call to action.

As part of their call to action, an informational pamphlet created by the Price of Water group and distributed by members of Shoal Lake No. 40 reads:

“The people of Shoal Lake Number 40 First Nation have been relocated and isolated, so Winnipeg can have fresh, clean drinking water.”

In regards to the Universal Declaration of Human Rights (UDHR) Article 23, the pamphlet reads: “Meet real people struggling to survive with little hope of development in a severely restricted designated area.”

And, in response to the UDHR Articles 25 and 26: “Loads of inadequate shelter and services – visit your choice of dilapidated home or infrastructure (school, day care, offices).”

The pamphlet includes a photograph of a family transporting groceries and drinking water from the grocery store on the mainland by foot and by sled across the thinly frozen ice path connecting their community on the island to the mainland.

“Risk your life accessing the museum: level of risk may vary by season and weather,” the pamphlet reads below the photograph.

For suggestions about how to get there, the pamphlet reads, “Begin at the CMHR in downtown Winnipeg, [ . . . ] follow the ‘healing waters’ supply pipe to its source at Shoal Lake No. 40 First Nation.”

The pamphlet directly refers to the United Nations Declaration on the Rights of Indigenous Peoples in order to denounce daily violations of the rights to clean water, safety, security, and the necessities of life in Shoal Lake No. 40.

Redsky and Wapioke both discussed the need for awareness about the misuse of water, water diversions, and the situation faced by those residing in the Shoal Lake region.

Redsky said, “The first question I ask people [in the city] is, ‘Where do you get your water from?’”

Partnering with other First Nations communities on the water issue is one of Shoal Lake No. 40 First Nation’s main priorities. The community has been developing alliances with Treaty 1 and Treaty 5 groups that have been flooded due to misuse of that water.

“Water is a part of all of us. Water is going to connect all of us together [ . . . ] We don’t have clean water; [therefore] we don’t have opportunities. Water is life; all we want is life.

“We want to let [Winnipeggers] know what is going on at the other end of the pipe,” Redsky said, alluding to an ongoing water dispute between the City of Winnipeg and First Nations communities residing in the Shoal Lake region.

“Most of all,” Redsky continued, “We just want to be connected to [the rest of] Canada – that’s our first and foremost solution as an isolated community.”

At the grand opening ceremonies, CMHR Board of Trustees member Wilton Littlechild made a speech about the CMHR as part of a “journey on the hopeful path for peaceful coexistence” and presented the museum as an opportunity to call for action.

Based on the United Nations Declaration on the Rights of Indigenous Peoples established in 2007 as the framework for action, the opportunity he spoke of included indigenous views and perspectives in development projects.

During his speech, Littlechild spoke about the UDHR’s inception in 1948:

“The indigenous peoples were not represented, and we [the First Nations] were left out. It took us a long time to gain recognition as people of the United Nations – as human beings with human rights.

“One of the most powerful opportunities for change will be the museum and the role that it will play in education and dialogue,” Littlechild added. “We will have opportunities to learn that treaty rights are human rights, that treaties are a solution, and that we are all treaty people.”

Littlechild stressed the significance of the museum for providing a chance “to build on the strength of our peoples and commit to a better Canada where the human rights of all peoples are honoured and respected.”

“We are not attacking the museum – we are targeting the governments that have put us in this situation,” said Redsky, addressing his community’s position on the museum.

“Our friends from the museum keep supplying us [at the protest camp] with food and wood – they understand us. We want more people to understand.

“Here’s an opportunity to bring our stories [out into] the open.”