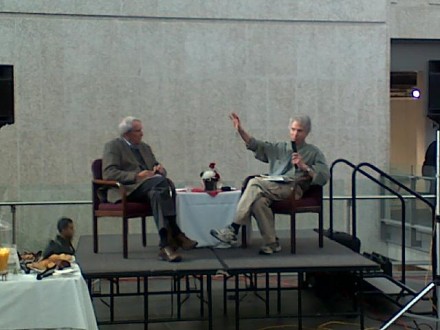 The talk focused on the role of the engineer and the way that engineering intersects with political and social questions. Bucciarelli has advocated for the introduction of a Bachelor of Arts in Engineering program at MIT that would give students a chance for “reflective, liberal study of what counts as engineering knowledge—its rhetoric, its historical development, its limitations, its power in application—as well as in the traditional activity of solving well-posed, single-answer, exemplary problems of the disciplines.”

Referring to a presentation he had seen that showed a large number of people with engineering degrees who no longer worked on engineering problems, Bucciarelli said, “It could mean one of two things: either the engineering degree gave them a more general education than they thought [ . . . ] or they’re not doing engineering as their faculty defined it.”

Both speakers emphasized that engineering projects involve more than solving technical problems—or, as Bucciarelli put it, “turning the crank”—however difficult those problems may be. Schafer used the Concorde supersonic airplane as an example. “[It was] the most perfect design. It was a brilliant success,” he said.

Schafer added: “Actually, it was one of the great disasters for engineering. It looked gorgeous, it was the fastest plane ever built, but it was an environmental disaster, the noise pollution was dreadful, [ . . . ] it used enormous amounts of fuel, [ . . . ] and it was a bust financially.”

There was also, Bucciarelli pointed out, “no room for overhead baggage.”

“The purpose of this greatest engineering project of all time was to fly a handful of wealthy people from New York to London a few hours faster than they could do otherwise,” Schafer said. “Engineers should be involved in an overall more holistic process involving other people – finding out whether we actually want to build a supersonic plane, whether it makes environmental or financial or human sense.”