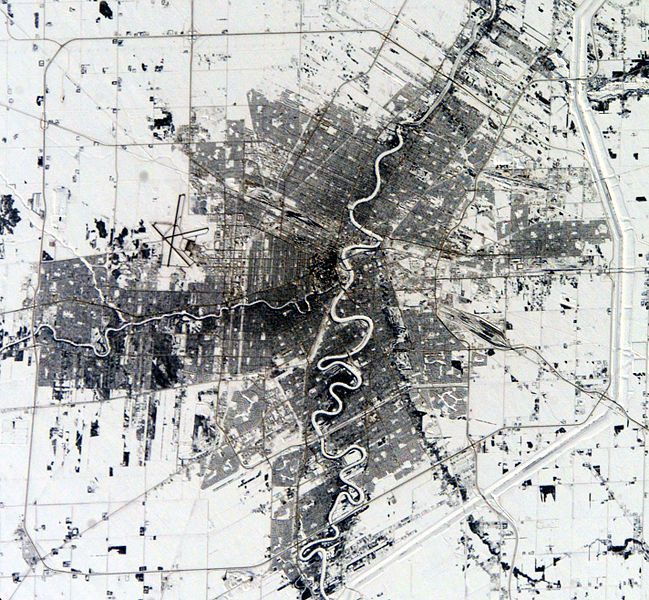 Since a draft report from Texas-based Matrix Consulting Group Ltd. recommending deep cuts to the Winnipeg Police Service (WPS) came to light, the City of Winnipeg and the WPS have been exchanging snide remarks regarding the efficacy of the WPS.

While I personally have not seen the report, I have a drastic idea that would greatly reduce the number of staff required for the WPS and help solve this “out of control” (according to Councillor Russ Wyatt) budget: lessen the number of police officers required by controlling sprawl. Reducing the area officers have to service is the best way to decrease the need to hire more officers.

The addition of major developments at the city’s fringes increase the need for additional resources (read: officers) to service those developments. Rural single-family dwellings and large commercial developments are inefficient uses of land, and their development forces City of Winnipeg officials to increase the staffing complement.

I recently got in touch with our council’s finance committee members. When I communicated this problem to one City Councillor Paula Havixbeck, she went on the defensive, presumably because she is in one of the wards with the most sprawl. The following is the unedited reply from Havixbeck stating suburban expansion is not the problem:

“The reason more officers are hired is to serve the inner city and North End. The majority go there, in fact, since I’ve been on council, all new resources have been directed there. There will not need to be any new fire or police in the Ridgewood South area. In the planning department report online, it states existing services are adequate.”

My question for her is if this area can be serviced without additional resources, why are we operating with the current amount of resources? Does this mean that until Ridgewood South gets built the WPS will be overstaffed in District 6?

After receiving that comment from Havixbeck, I decided to do a search of the City of Winnipeg City Clerk’s Decision Making Information Systems for other precinct plans and subdivision applications. I did a search for all plans going back to 2007 that said that the development of this area would necessitate an increase in police services. The results? Zero. No new subdivision would require any additional police resources. In that same time, according to the Winnipeg Police annual reports, the number of sworn officers has increased by 133. Is Councillor Havixbeck telling me that all 133 officers were placed in Precinct 1? Also of note is that these numbers list sworn officers and do not include civilian staff.

Havixbeck’s statement shows ignorance on the part of all members of council. Do they actually believe that building on the fringe of the city will not stretch the police services (and the city budget in general) to the limits? At what point will the city realize that the cost/benefit analyses being submitted to them by the developers are self-serving and that the cost side is much greater than the developers make out?

While I respect Councillor Havixbeck, I disagree with her assertion that fringe developments do not cause increased burden on police services. The Ridgewood South subdivision may not appear to necessitate an increase in staff, but as the old saying goes, no individual raindrop ever considers itself responsible for the flood.

This week in violence