It’s been a long time coming, but the new era of Bison Football has finally arrived. Investors Group Stadium (IGF) has opened its doors, and the first Bisons game has been played in front of a raucous crowd of thousands of football fans.

“There was a moment when they showed the attendance and it was just a special moment because we’ve played in the Butler Hut (at the old University Stadium), which was just a garbage facility,” running back Anthony Coombs said with a laugh. “Coach Dobie always keeps on talking about ‘it’s a new era,’ but at that moment it felt like we had stepped into that new era.”
“We have the fan base, the new players and the new facilities. It felt really good.”

With an approximate 33,000-seat venue to play in, selling out the place is totally unrealistic. But with an announced attendance of 10,199 for the first game, Bison Sports hopes to maintain those sorts of numbers.

“I knew we’d get a good crowd, but I didn’t expect anything like that,” explained Bison head coach Brian Dobie. “I’m so proud of all the football fans of Winnipeg to be true fans and come out and support us as well.”

For those who had attended Bison home games at University Stadium, attending a Bison game at IGF is like being transported to an alternate universe. From the HD scoreboards with video replays, to a roomy concourse with nice washrooms and concessions to simpler pleasures—individual seats as opposed to wooden benches—the Bison Football game day experience has been completely transformed. All the staff and volunteers who worked to put on a memorable game day experience for Bison home games did a fantastic job on their first run. 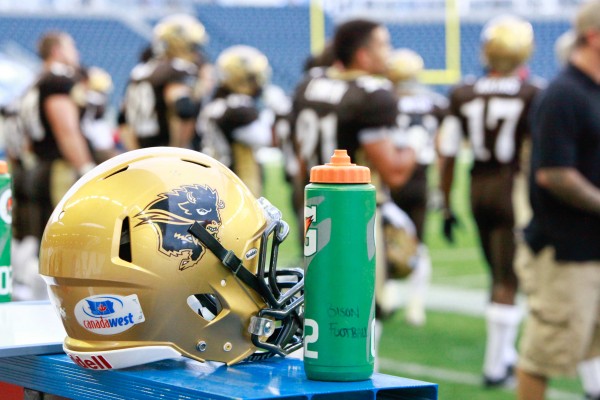 “I hope that our students and our campus just flood in here and make this part of an experience,” said Dobie. “There’s four home games. If I were a student, I would come out to this palace and cheer my team that represents our university. I would party in the stands and have an experience with my buddies. Why? Because you can. It’s sitting right here in the middle of our campus.”

“They’re the only school in the west where the student body comes out like crazy. They load it up,” explained Dobie. “I want our students of Manitoba to kick the University of Saskatchewan’s student body’s butt in terms of coming out and being football partygoers and having fun and having that student experience on campus.”

“I think the university embraces so many successes – from research, to teaching, to athletics. And it’s something that, again, with this stadium, we can embrace. I hope that our professors and our support staff, as well as our students, come out and feel that they are a part of it.”