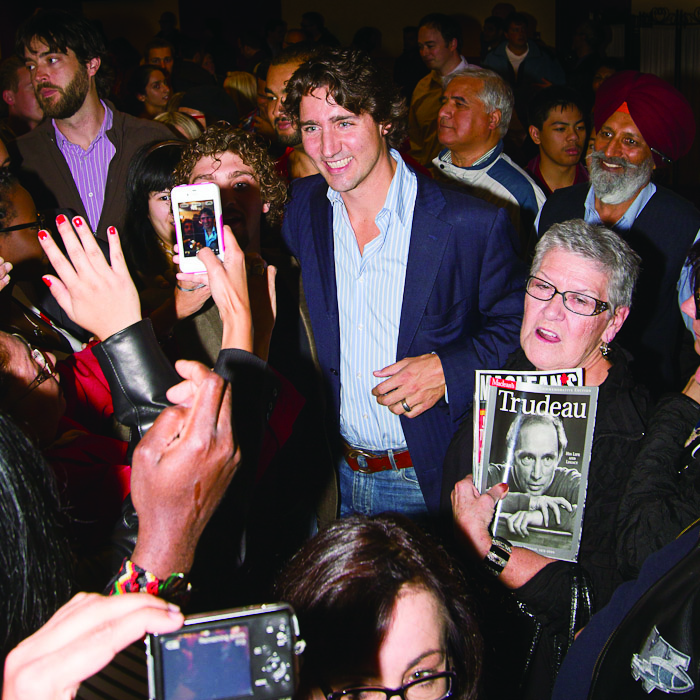 Manitoban Liberals came out en masse on Oct. 20 to attend a rally where Justin Trudeau discussed his newly announced bid for the leadership of the federal Liberal party.

Kevin Lamoureux, Liberal MP for Winnipeg North and the only Liberal MP in Manitoba, opened the event with a short discussion on the Liberal party’s need to recruit new members and proselytize loyal Liberal voters in the province.

Lamoureaux stated that a room full of Liberals has been a recent rarity, commenting that he hadn’t seen so many together in a long time. Urging the audience to recruit Liberal supporters, Lamoureaux explained, “If each and every one of us here went out and got five members to go onto the Internet and sign up, what a difference that would make.”

Moments later Trudeau entered like a rock star to blasting music, thunderous clapping, and cheering from hundreds of supporters, bearing striking resemblance to the craze that followed his father, the late Pierre Elliott Trudeau, during his time in the Prime Minister’s chair.

Mention or comparison to his father, however, was not included in his speech, which focused on criticizing the policies of the current Conservative government, especially pertaining to scientific research and the government’s perceived refusal to communicate with its citizens.

Zeroing in on the impending closure of the Experimental Lakes Area (ELA) in northwestern Ontario, Trudeau commented that the Harper government, which had previously injected $1 million into the ELA, was now turning against the program because “continued research into environment and pollution keeps getting in the way of their short-term, short-sighted agenda.”

“This federal government,” Trudeau continued, “in it’s upcoming budget will spend somewhere in the neighbourhood of $276 billion. Up against that, the ELA program costs about $2 million every year.”

Trudeau also briefly touched upon the Conservative government’s closing of the National Research Council buildings in Winnipeg, and shutting down of Agriculture Canada research at the University of Manitoba.

Trudeau did not hold back on his critiques of Prime Minister Harper’s personal style of governance, arguing that it was against the values of democracy and of Canadians.

Remarks about the New Democratic Party (NDP) were brief, with Trudeau only commenting that the NDP has “chosen to go down a similar path” to that of the Conservatives.

Trudeau argued that, in picking Thomas Mulcair as federal party leader, the NDP had selected an individual who remains “very top-down and very strong and very aggressive like Mr. Harper is [ . . . ] they’re flip-sides of the same coin.”

While Trudeau avoided explaining any of his specific policies or philosophies that he would include in his platform during his speech, he responded to criticisms and questions regarding this later in the day.

Trudeau noted that he was interested in pursuing “real solutions to problems, not band-aids or sound bytes,” which sometimes entails not knowing the answers to every problem at once.

“Someone who says they have all the answers is exactly the kind of politics that people tend to be fed up with,” Trudeau continued.

Trudeau then focused on middle class oriented politics, stating that Canada needs to advance towards making the middle class strong.

“We understand that a strong Canadian economy has to be a strong middle class. That is a very important policy statement that I have made from the very beginning.”

Responding to the question of what he would do to help Canadian students, Trudeau told the Manitoban that he would ensure equal and barrier free access to education for all Canadians.

“Our greatest resource [in Canada] is Canadians ourselves. And our capacity to be well educated, to be able to engage in the knowledge economy, is the one thing that’s going to determine Canada’s success in the coming years.”

The Liberal leadership campaign begins on Nov. 14 with the vote for new leadership occurring on April 14, 2013.